Naturalism is the belief that everything arises from natural properties and causes, and supernatural or spiritual explanations are always excluded. It may seem contradictory to include Naturalism in a discussion of religion (since many claim not to be religious), but Naturalism is a religion. Even though Naturalists refuse to believe in anything supernatural or miraculous, they hold to a system of faith and have objects of worship. Naturalists usually identify as either Atheists (no God) or Agnostic (don’t know if there is a God.)

Christian Apologist Ronald Nash wrote that naturalists believe that “Nature is a self-explanatory system.” They believe that all things came into being through evolution, survival of the fittest, natural selection, etc. Humans, they argue, are a highly developed species of ape. Dr. Terry Mortenson with Answers in Genesis summarizes the implications for man: “there is no purpose or meaning to life—we are simply the product of time and chance and the laws of nature; there are no moral absolutes that apply to all people in all times; moral values are simply personal beliefs or opinions, which themselves are the result of chemical and physical processes controlling matter. Likewise, there is no life after death, for the laws of nature still apply and our bodies simply decay over time and are mixed in with other non-living matter in the earth.” Naturalism is a false religion that must be rejected primarily because it fails to acknowledge and submit to God the Creator.

Therapeutic Moralistic Deism is a very popular religion that some mistakenly believe to be Christianity. Adherents may not call their religion by this name, but this is the best way to describe this form of religion. Therapeutic Moralistic Deism is therapeutic because it is designed to help you feel good and/or better about yourself. It is moralistic because it proposes to answer questions about morality (right and wrong). It is Deism because it holds to the existence of a god (Deity), but this god who can be whatever you want him/her/it to be. According to Christian Smith in his book Soul Searching, Therapeutic Moralistic Deism consists of beliefs such as these: 1) “A god exists who created and ordered the world and watches over human life on earth.” 2) “God wants people to be good, nice, and fair to each other, as taught in the Bible and by most world religions.” 3) “The central goal of life is to be happy and to feel good about oneself.” 4) “God does not need to be particularly involved in one’s life except when God is needed to resolve a problem.” and 5) “Good people go to heaven when they die.” Therapeutic Moralistic Deism is a false religion and must be rejected because it lies about God, man, sin, and salvation. God is active and working all things according to the purpose of His will (not ours) to the praise of His glorious grace (Eph 1:5-6).

Christianity is the only true religion because it is what God has revealed to us in the Holy Bible. Christianity tells us about the good news of the Gospel of Jesus Christ. We learn that “God so loved the world that He gave His one and only Son, that whoever believes in Him should not perish, but have eternal life” (John 3:16). The focus of the Bible is not to make us feel good about ourselves but to show us our sin and our need for a Savior (Jesus). We learn about the only God who shows mercy by reconciling people to Himself and giving them eternal life through His Son Jesus Christ. Christianity is an evangelical religion because it is meant to be shared with everyone. See Jesus’ Great Commission in Matthew 28:18-20. 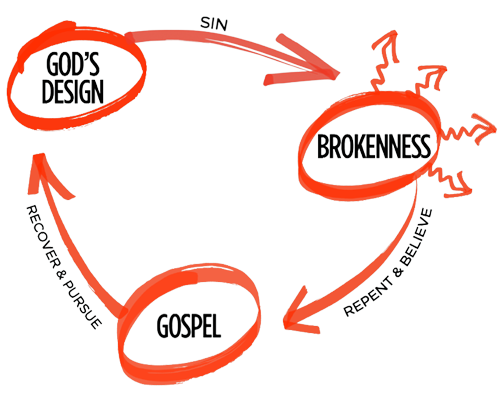 There are many great methods to share the Gospel. My preferred way is the “3 Circles”. You start with God’s design in His perfect creation. He created us and all things. Sadly, we do not remain in God’s design because of our rebellion against Him. Our sin separates us from God (Is 59:2) and results in brokenness. The lines moving away from the “brokenness” circle represent ways that we try to fix ourselves and fail (money, power, fame, etc.).

Our healing from brokenness is found in Jesus. He died to take the punishment for our sins and to offer us forgiveness and redemption. In order to be saved, we must “repent and believe the gospel” (Mark 1:15). We believe what the Bible says about Jesus’ life, death, and resurrection. Through God’s grace we are able to recover and pursue His design for our lives. We are reconciled back to God and adopted into His family. We receive the Holy Spirit who helps us in this life and is the guarantee from God that He will come back for us and allow us to live with Him for all eternity. Chrisianity is true and God wants us to follow Him in faith.